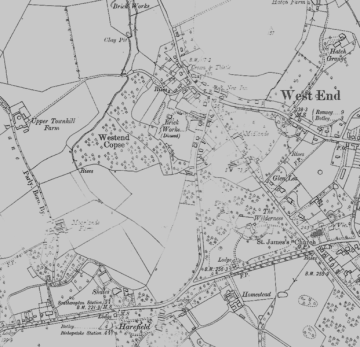 Bronze Age man (2000-600BC) left his mark in the Moorgreen area of the parish with a series of Round Barrows most of which no longer exist. The defensive position of the high ridge above the village made it ideal for the hilltop fort built during the Iron Age(600-100BC). The hill was used for defence during the Napoleonic Wars when a Naval Shutter Telegraph station was part of a line from London to Plymouth.
Early maps show Westend as a small hamlet on a crossroads along the track from Romsey to Portsmouth. The name is said to have originated from the parish being at the west end of Shamblehurst tithing or the end of the waste or common of Netley. The area was known mainly for agriculture, market gardening and the flour and papermill, now called Gaters Mill, which was in use as early as the 17th century.
Westend remained a hamlet until the Turnpike Road was built at the beginning of the 19th century when many businesses, dwellings and public houses began to line the road. The wooded hillside enjoying fine views across the Itchen Valley was much sought after as a place to live. Several large houses were built, many from locally made brick, and with the workforce who supported them the village began to grow.
In 1894 the Civil Parish of West End was established, formed from parts of Allington and Shamblehurst tithing. There have been several boundary adjustments since then, the largest being the transfer of the Harefield and Thornhill areas to Southampton in 1954. Since WW2 the village has grown as a mainly residential area with shops to support the local population.

The earliest known religious building in West End was an oratory or chapel mentioned in 1552 as being for the use of the Lords of the Manor of Allington and their tenants. The Ecclesiastical Parish of West End was formed in 1840; prior to this it had been part of the Parish of South Stoneham in the Hundred of Mansbridge. The church of St James, built in 1838 at the top of Church Hill in the south of the parish, was replaced in 1890 after a bad report from the Bishop on the state of the Church and an act of God when the spire was struck by lightning.
Between 1764 and 1843. several dissenter-meeting houses were registered including Methodist and Bible Christian. A Bible Christian Chapel was built in 1846 in Chapel Road, also Methodist chapels in Moorgreen and Swaythling Road (1900), and a Baptist Chapel still exists in Beacon Road. The first Catholic Church was built in 1961 just off the High Street in St James Road.

Early maps and Parish Registers record a poor house at the east end of the village in what was Shamblehurst Tithing. The red brick South Stoneham Union was built in 1848 to house 250 inmates. It was enlarged in 1887 and again in 1894 when an isolation hospital was added. It serves today as Moorgreen Hospital.

The National School to house 192 children was built in 1838 on the north side of what was Botley Road, now the High Street. It was enlarged in 1866 when an extra room was added. In September 1904 the children moved to a new school several hundred yards east on the south side of the High Street. The old National School building became the Old Parish Hall.  In 1871 Mrs Harriet Haselfoot built a school for younger children in Moorgreen Road, which continued until 1894 when it became the National School's infants department.
To house a growing population of children in West End, a new St James School was built and the National School building became the Hilldene Centre, now used as a community centre where adult classes and activities are held.

The present 'village' is mainly residential most of the large houses have gone or been used for other purposes. The grounds of what was Hatch Grange form a recreation/conservation area of woodland, hills and fields in the centre of the village. The High Street boasts a good mixture of shops supplying the needs of the local population. West End is now the home of The Ageas Bowl ( formally known as The  Rose Bowl ), Hampshire County Cricket Club's prestigious new Cricket Ground.

Return to the Home Page