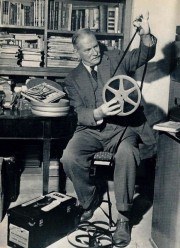 The memorial to Richard St.Barbe Baker marks the completion of a programme of environmental improvements that has been undertaken in West End's High Street. Totalling £180,000 the project has been funded by the Borough Council with the support of the Hedge End, West End and Botley Local Area Committee. The improvements have been undertaken in partnership with Vail Williams and include upgraded pavements, safety railings, better lighting plus the removal of graffiti and damaged planters. The scheme has also seen the introduction of a local CCTV system managed by S & P Southampton Ltd.

The bronze bas-relief of Richard St.Barbe Baker was made by sculptor Jill Tweed. The bronze was cast by Burleighfield Arts Ltd, High Wycombe and the Portland Stone column and granite top were supplied by Vokes and Becks of Winchester. This is Jill Tweed's third work in the Borough. Her first, completed in 1995, was "The Railwayman" statue - a prominent sculpture in Eastleigh's Leigh Road shopping precinct. Her second, completed in 2001, was the bronze "Angel of Mons" on the town's War Memorial.

Richard St.Barbe Baker,OBE was born on the 9th October 1889 in West End. He was a forestry adviser and silviculturist and Founder of the Men of the Trees in 1922. This organisation is now known as the International Tree Foundation.

He became Assistant Conservator of Forests in Kenya and Nigeria in the 1920's and was concerned for the rapidly decreasing fertility of the land. He believed it was necessary to plant more trees to combat the shifting methods of agriculture and he initiated the idea of voluntary tree planting by native tribesmen. He founded the society, The Men of the Trees, in Kenya in 1922.

For the remainder of his life Barbe Baker travelled extensively around the world, lecturing and writing to convey his message about the importance of trees. Through his determination and energy he influenced the protection of the giant redwoods in California, the replanting of large areas in northern Africa and stimulated a new world-wide direction for forest conservation.

In 1978 Richard St.Barbe Baker received an OBE for his work. He planted his last tree in Saskatoon, Saskatchewan, Canada on 5th June 1982 in a ceremony celebrating World Environment Day, and died four days later in his ninety-third year.

A SERIES OF PHOTOGRAPHS TAKEN AT THE UNVEILING

During the spring of 2013 the Barbe Baker memorial was moved to a more appropriate place amongst the trees in the Memorial Gardens, High Street , West End.