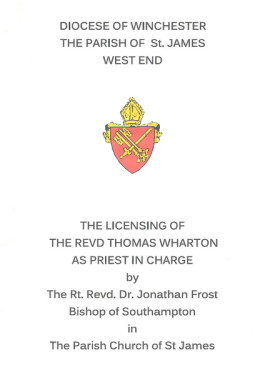 Several members of West End Local History Society were invited to the Licensing of the Revd. Thomas Wharton on Sunday 8th of September 2013.

In my previous parish I was half Thomas & half Tom, but I’ll stick with Thomas for now!

I grew up in Bramhall, Cheshire in a musical family, studied cello in Glasgow at the Royal Scottish Academy of Music and Drama and later worked as a cellist in Mafeking, South Africa between 1994 - 2000. It was here where Vessi (who plays viola) and I met, and where Anthony was born in 1997. Returning to live in Ilkley, West Yorkshire, Michael our youngest arrived in 2001.

I worked as a string teacher and freelanced as a cellist with many orchestras including the Hallé and the Bournemouth Symphony orchestras. Sensing a slightly different call, in 2003

I swapped bow tie and tails for cassock and surplice, studied for ordained ministry at Westcott House, Cambridge and moved to Grassington in the Yorkshire Dales where I completed my Curacy between 2005-2008.

I have recently said farewell to my previous parish where I had the privilege of being Team Vicar in the Parish of Smannell with Enham Alamein (in the Team Ministry with Knights Enham, Andover Deanery) and as Chaplain to the Enham Trust, a charity providing support and independent living to disabled people.

I like keeping active, occasionally playing cricket and tennis, and I’m taking part in the Great South Run in October in support of the Enham Trust. I’m looking forward very much to working with everyone at West End and discovering together how God is calling us to serve Him and serve the wider community in this place.